Chicanx Histories in the Northern Borderlands

Mexican Americans/Chicana/os/Chicanx form a majority of the Latino population in the United States. Focusing on the Pacific Northwest and the Midwest, multidisciplinary papers examine the Chicanx movement and experience beyond the Southwest to illuminate how Chicanxs have challenged racialization, marginalization, and isolation in the northern borderlands.

Mexican Americans/Chicana/os/Chicanx form a majority of the overall Latino population in the United States. Scholarship on their presence, experience, and contributions has been focused, until recently, on the Southwest. In this collection, Chicanx scholars, both established and emerging, offer academic and non-academic perspectives specifically on the Pacific Northwest and the Midwest. These multidisciplinary papers address colonialism, gender, history, immigration, labor, literature, sociology, education, and religion. Here El Movimiento (the Chicanx movement) and the Chicanx experience are set beyond the boundaries of the Southwest, illuminating how Chicanxs have challenged racialization, marginalization, and isolation in the northern borderlands.

Editor Jerry García received his PhD from Washington State University, and has had academic appointments at Iowa State, Michigan State, and Eastern Washington Universities. His most recent book is Looking Like the Enemy: Japanese Mexicans, the Mexican State, and U.S. Hegemony, 1897-1945 (2014). 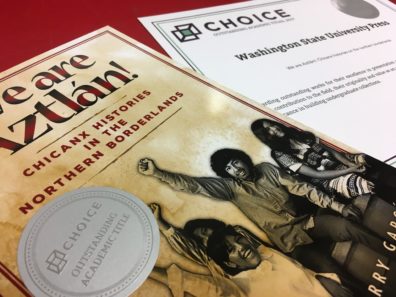 “This scholarly collection challenges the usual southwest focus on the Mexican and Latino experiences and diverse populations in the US…Each contributor’s academic findings are based on historical archival and oral interviews, which makes this book original and organic. This is the first book collection that links the various Mexican and Latino social and cultural experiences within the US Pacific northwest and midwest regions. García’s leadership in bringing together several scholars will result in major contributions for future research and scholarship on this critical subject matter. Every library should obtain a copy for their ethnic studies and history collections.”–J. G. Moreno, Northern Arizona University, CHOICE

“This collection sheds light on the often-neglected study of Mexican ancestry people outside California or the U.S.-Mexico borderlands. By highlighting the history of Chicano people in the Pacific Northwest and the Great Lakes region, the transnational and translocal links between Mexico, California, Texas, and the vast Mexicano and Tejano diasporas are revealed.”–Marc Rodriguez, author of The Tejano Diaspora: Mexican Americanism and Ethnic Politics in Texas and Wisconsin