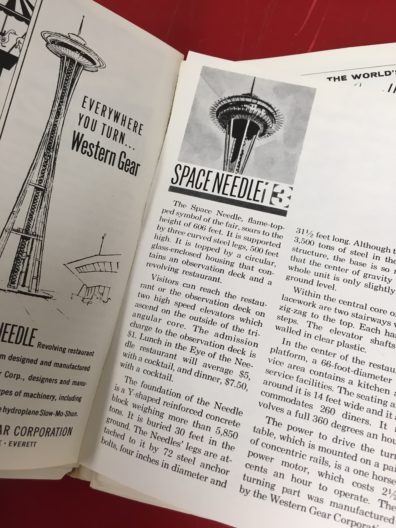 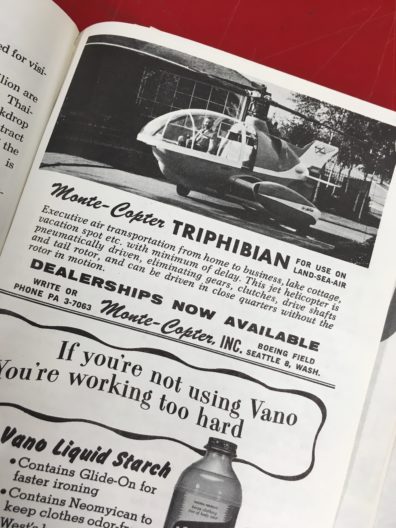 Dinner (including a cocktail) at the top of the brand new Space Needle averaged $7.50

The text reveals that the Space Needle soars to a height of 606 feet. Three curved steel legs, 500 feet high, support a circular, glass-enclosed observation deck and revolving restaurant served by two high speed elevators walled in clear plastic on the outside of a triangular core. In the center, two 832-step stairways zigzagged to the top.

Powered by a one-horsepower motor, it took an hour for the restaurant to rotate a full 360 degrees at a cost of 2 1/2 cents. Diners could expect lunch in the Eye of the Needle restaurant to average $5 and dinner, $7.50 (both prices include a cocktail).

Admission to the observation deck was $1. Buried 30 feet in the ground, the needle’s Y-shaped reinforced concrete foundation weighs more than 5,850 tons, and its legs are attached by 72 steel anchor bolts, each four inches in diameter and 31 1/2 feet long. Find more on the current Space Needle and its more than $100 million renovation here.

According to the guide, the 1.2 -mile Monorail trip from Westlake Mall downtown to the fairgrounds took 95 seconds. One-way fares were 50 cents for adults and 35 cents for children. Round trip fares were 75 and 50 cents.

Described as previewing the future of mass-transit, the trains were 120 feet long and 10 feet wide with a capacity of 450 passengers, but 325 of them had to stand. Empty, each of the four light-metal alloy cars that make up a train weighed about 20,000 pounds. Powered by General Electric 32-volt, 6,500-rpm electric motors, they rode on rubber tires and could reach speeds of over 70 miles an hour on the straight run. Made from pre-cast concrete supported by T-shaped concrete columns, the track is three feet wide and five feet deep, and required more than 15,000 tons of steel.

Below, fair visitors were welcomed by a bronze Chief Seattle statue. At its Fifth and Denny Way site since 1912, numerous groups proposed relocating it prior to the fair. You can read about that, and stories of other memorial close calls in Monumental Seattle.

There were also ads for some interesting products:

Enjoy the latest development in water sports–5 to 6 motorless, noiseless fast-boats propelled by underwater cables–for low-cost enjoyment of water-skiing. Made in Switzerland.

Executive air transportation from home to business, lake cottage, vacation spot etc. with minimum of delay. This jet helicopter is pneumatically driven, eliminating gears, clutches, drive shafts, and tail rotor, and can be driven in close quarters without the rotor in motion. Dealerships now available.