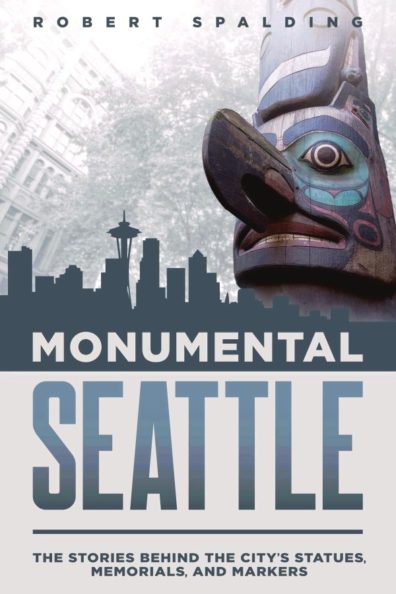 Beginning with the 1899 installation of a Tlingit totem pole in Pioneer Square and stretching to Safeco Field’s 2017 Ken Griffey Jr. sculpture, Seattle offers an impressive abundance of public monuments, statues, busts, and plaques. Private donors and civic groups commissioned works by prominent national sculptors, as well as local artists James A. Wehn, Alonzo Victor Lewis, and others, to represent diverse perspectives and celebrate a wide array of cultural heroes, dozens of firsts, the Alaska-Yukon-Pacific Exposition, aviation, and military and maritime service. Whether cast in bronze or carved in granite, their longevity is not guaranteed. The newest book from Washington State University Press, Monumental Seattle: The Stories Behind the City’s Statues, Memorials, and Markers, offers Seattle residents and visitors a historical narrative of these public remembrances—accounts that often take unexpected twists and turns.

A Seattle Chamber of Commerce delegation stole the city’s first heritage marker from a Native Alaskan village. A bust of Chief Seattle was “kidnapped” and held for ransom. Visitors find the statue hailing William H. Seward—Secretary of State under Abraham Lincoln who later negotiated the 1867 purchase of Russian Alaska—not in Seward Park, but in Volunteer Park. Similarly, the granite bust in Denny Park does not honor a Denny. Intense public scrutiny of a memorial depicting a World War I soldier prompted its removal from the city center. An unassuming plaque positioned on the corner of a downtown building belies a secret tale of Gold Rush love, betrayal, and murder.

In addition to telling the stories behind these heritage markers, author Robert Spalding considers their history and deeper meaning, exploring how and why people chose to commemorate the past, the selection of sites and artists, and the context of the era. He also discusses how changing societal values affect public memorials, noting works that are missing or relocated, and how they have been maintained, altered, neglected, or even vandalized. Maps and appendices provide details on locations, artists, inscriptions, and more.

Monumental Seattle is paperback, 6″ x 9″, 220 pages, and lists for $22.95. It is also available through bookstores nationwide.