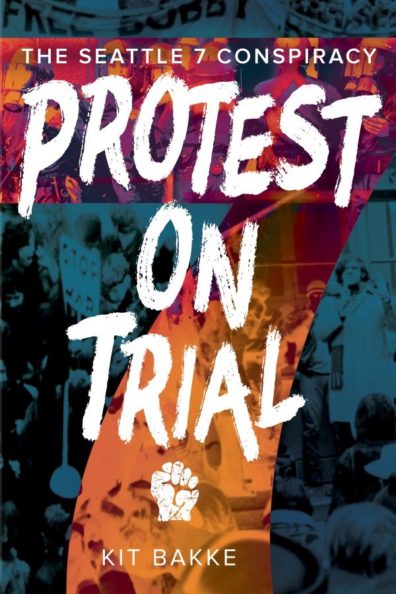 PULLMAN, Wash.— Author Kit Bakke believes that the freedom to organize and protest are crucial to American democracy. But across the nation in the late 1960s and early 1970s, courtroom decisions and the FBI’s utilization of wiretapping, warrantless break-ins, and informants were destroying activist groups and threatening those rights. The Emerald City was no exception. In her new book, Protest on Trial: The Seattle 7 Conspiracy, Bakke chronicles the dramatic story surrounding the arrests and trial of seven Seattle Liberation Front (SLF) leaders.

As anti-Vietnam efforts accelerated across the U.S., young activists converged on Seattle, drawn by its natural environment, counter-culture reputation, and history of political dissent. After a February 1970 antiwar demonstration at the city’s downtown federal courthouse culminated with multiple injuries and arrests, the Seattle 7—Michael Abeles, Jeff Dowd, Joe Kelly, Michael Lerner, Roger Lippman, Chip Marshall, and Susan Stern—faced federal conspiracy and intent to riot indictments. When it appeared the government would lose their case, the presiding judge issued a stunning ruling that abruptly ended the chaotic proceedings and sent the defendants to prison.

FBI Director J. Edgar Hoover and President Nixon’s Attorney General John Mitchell had targeted the SLF for, as Hoover termed it, “neutralization.” Bakke examines their tactics and contemplates why the Department of Justice chose to use a heavyweight legal weapon in Seattle, even though other cities harbored larger and more violent antiwar targets.

Like the trial, the counterculture movement was improvisational and messy. The Seattle 7 inhabited an exhausting vortex of idealism, violent rhetoric and indulgent pleasures. Bakke conducted dozens of interviews with defendants, their attorneys, FBI agents, journalists, jurors, the U.S. Marshal, students, and SLF members, supporters, and critics. She is the first book author to focus on the anti-Vietnam movement in a single city and include perspectives from participants on both sides of the barricades. She shares their thoughts as they reflect on that politically complex and emotional time.

Although not in Seattle, Bakke was an activist, and is intimately familiar with the political and social culture. In college, she founded a chapter of Students for a Democratic Society (SDS). After graduation, she worked in the SDS Chicago national office and later joined the militant Weatherman faction, participating in antiwar and anti-capitalism actions around the country. Born and raised in Seattle, she returned to work as a pediatric oncology nurse. She holds bachelor’s degrees in nursing and political science, and master’s degrees in nursing and public health. Today, she volunteers in local philanthropic organizations and writes. Her first book was Miss Alcott’s E-Mail: Yours for Reforms of All Kinds.

Just published by Washington State University (WSU) Press, Protest on Trial is paperback, 6″ x 9″, 252 pages, and lists for $22.95. It is available through bookstores nationwide, direct from WSU Press at 800-354-7360, or online at wsupress.wsu.edu. A nonprofit academic publisher associated with Washington State University in Pullman, Washington, WSU Press concentrates on telling unique, focused stories of the Northwest.