Tasked with confirming the outline of North America’s Pacific seaboard and searching for the elusive Northwest Passage, Cook left Plymouth and traveled to New Zealand and the Hawaiian Islands. From there, he explored the Pacific Northwest’s coastline, landing near Oregon’s Cape Foulweather and eventually entering Vancouver Island’s Nootka Sound. He anchored near the First Nations village of Yuquot and then sailed to the Bering Strait, where he identified Alaska’s Cook Inlet.

Written by two young officers and discovered languishing in Australian archives, the journals chronicle landings along Hawaii, Vancouver Island, and Alaska, as well as initial European contact and Cook’s dramatic death at Kealakekua Bay, and include charts and drawings. They provide the first reasonably accurate maps of North America’s west coast and the earliest comprehensive report from the Bering Sea ice pack. Yet the men kept their existence a secret. If the British Admiralty had discovered the documents, it likely would have ended their careers.

First lieutenant James Burney offers a scarce account from the consort vessel, Discovery, providing new details and important, thoughtful impressions of North and South Pacific people and places. Working under the notorious William Bligh, Resolution Master’s Mate Henry Roberts performed essential hydrographic and cartographic tasks. He was only a few feet away when Cook perished. His logbook includes coordinates, tables of routes, records of weather at sea, and lively depictions of shore excursions.

Editor James K. Barnett is an Alaskan attorney who has written, co-edited, or contributed to multiple books and anthologies on Captain James Cook, Captain George Vancouver, and the history of Alaska. He served as president of the Cook Inlet Historical Society in Anchorage from 1998 to 2015, and found these long forgotten journals and images while researching in Sydney nearly ten years ago. He contributes context and commentary to complete the story 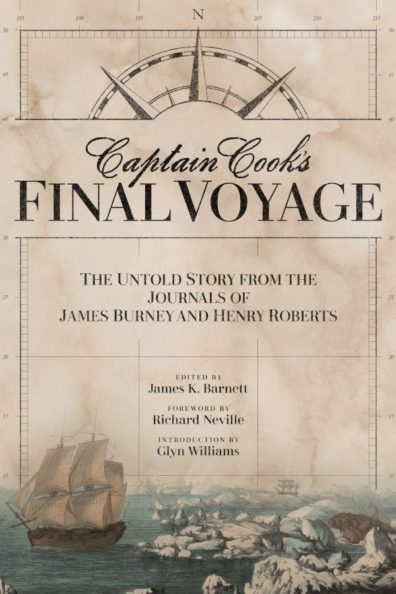