After the death of his beloved brother, 1857 to 1859 proved to be defining years in the life of Frederick Law Olmsted and his new family.

After a decade of Staten Island farming and New York City publishing, Frederick Law Olmsted (FLO) broke new ground in 1857 and again in 1858, setting his future course on 843 rocky and rugged rectangular acres in the middle of New York City.

Debated and delayed for years, the new Central Park was reaching its final stage in 1857. Olmsted, by chance visiting a Morris Cove, Connecticut, seaside inn favored by New Yorkers escaping city summer heat, learned from an old acquaintance that the park commission would soon pick a new superintendent to head up the work crew clearing the unkempt site. “We still haven’t found the right man,” his friend, newly appointed park commissioner Charles Wylls Elliott, told him.

Separately, Harvard botanist and author Asa Gray wrote on Olmsted’s behalf: “I desire very simply to say…that I know Mr. Olmsted well, and regard him as eminently fitted for that position. I do not know another person so well fitted for it in all respects, both on practical and general scientific grounds…he will do great honor to the situation and to his high and already honorable reputation…”

By the time the day came for the commission to vote, John Hull Olmsted and his family had already departed for southern Europe, hoping to improve his health. FLO spent part of the day nearby, writing his younger brother a long letter (one of their last) about his park superintendent quest:

“I have moved to town and done nothing else since I last wrote but canvass for the Superintendent’s office: I am now awaiting the result; the Board [of the Park Commission] being in session below a few doors.” Olmsted began his letter on September 11, 1857. Unaware his brother was failing fast, seven long news-filled paragraphs followed before Olmsted’s historic postscript: “P.S. After a very long session, and much debate, I am elected on the final vote, 8 of those present voting for me, one against me.”

These intimate and frequent family letters sustained FLO during his lifetime of career moves—especially his life-altering “Affectionately…father F.L.O.” letters to young John Charles Olmsted, who in the 1870s debated his own future in landscape architecture.

Meanwhile, the park commissioners, impressed by Olmsted’s direct farmhand experience with his own (obviously smaller) Staten Island work crews as well as his influential literary and city friends’ support, had indeed approved him in an 8-1 vote.

Olmsted and Vaux had previously met in 1851 at prominent American landscape gardener and Horticulturist editor Andrew Jackson Downing’s Newburgh, New York, home near the Hudson River. At the time, the English-born Vaux was Downing’s architecture assistant. While in London Downing had been impressed with Vaux’s artistic and drawing talent, and drafted the young man into his Newburgh office. Tragically, Vaux’s mentor drowned in a Hudson River boating accident, leaving him to carry on, first in Newburgh and eventually in New York City.

Vaux approached Olmsted to join him on a joint park design submission, knowing Olmsted’s on-site knowledge of each ledge, sink hole, and vista would be invaluable to any finished design plan. After some hesitation Olmsted agreed, and the two professionals rushed to finish their joint plan—Greensward—before the park commissioners’ spring 1858 deadline.

Evenings and Sundays, Olmsted and Vaux scouted park sites together on horseback and on foot, inspecting each part of the park for ideas to improve the bare landscape and sites to add footbridges and innovative sunken roadways. Almost a month after the April 1, 1858 deadline, the commission announced that out of 33 submissions, their final Greensward plan had won the top prize. Thus began a nearly lifelong off and on landscape design partnership.

Meanwhile, his brother’s family—a now-widowed Mary and her three young children (John Charles [JCO], Charlotte, and baby Owen)—who had stayed abroad to avoid a winter crossing of the Atlantic after John Hull’s death in November 1857, settled back into New York routines with continuing comfort and help from FLO’s father in Connecticut.

The Staten Island farm, which farmer Fred had handed over to John Hull years before, was mostly rented to tenants. Mary found a rented home in the city near the park where FLO was knee-deep in getting his winning park design cleared and finished by ground work crews.

On June 13, 1859, not quite two years after losing the brother who was also his best friend, Olmsted married his widow in a quiet ceremony in the Bogardus House in the park, presided over by New York City Mayor Daniel F. Tiemann. He kept his promise to his brother, “Don’t let Mary suffer while you are alive.”

The newest Olmsted family moved into the sprawling abandoned Mount St. Vincent Convent. Originally located along the old Boston Post Road, the convent sat on a hillside within the eastern park boundary between 102nd and 106th Street. There the children had glass galleries to explore, and eventually father FLO set up his office nearby.

By autumn 1859, Olmsted was deep in park duties and mired in Greensward design change details with ever-expanding park crews. Park commissioners granted him a two-month leave of absence to travel abroad. Once again he visited the grand parks there, but this time, instead of design plans, he brought back much-needed daily park operations details.

Letters during that separation—just three months after his marriage—provided a glimpse into happier and more settled times ahead on the home front. Joined dockside on September 28, 1859, by his closest supporters—his father John Olmsted came from Connecticut, his park design partner Calvert Vaux, and his new wife Mary, who wrote down details in a letter that arrived long after FLO’s ship docked in Liverpool. The three companions waved goodbye, then rushed to catch the Staten Island ferry that would follow FLO’s big ship through the harbor. “Our Staten Island boat was delayed behind barges which prevented us getting very near,” Mary wrote. Did he, by chance, see the three companions waving while he stood at the railing of his bigger ship, she asked?

As John Charles Olmsted, now almost 8 years old, waited back at the convent for his father’s return, a letter arrived describing the harbor and ocean sights. “Tell Charley I saw five whales, altogether, snorting and turning somersets (so it looked) in the water. Lots of birds floating and flying, and once, a little sparrow several hundred miles from land, too tired to move more, dropped on deck and allowed itself to be caught. It is alive—the sailors keeping it.” More adventures, such as FLO and JCO traveling to Europe in 1878, would follow in the decades ahead.

Olmsted’s brief 1859 visit to England and France showed his progress since the youthful 1850 journey abroad and his successful 1852 book Walks and Talks of an American Farmer in England. With formal letters of introduction to England and France’s leading garden and park makers, he conducted a professional tour, gathering information for the new (and news-worthy) Central Park of New York City.

In his December 28, 1859, report to park commissioners, he summarized his rushed journey. Working from the north of England to the south, his first stop (as in 1850) was Birkenhead Park, where he “obtained full particulars of its construction, maintenance and management.” With no time to delay, he continued south and visited the park and gardens of Chatsworth, including the private grounds of one of Olmsted’s most admired English designers, Sir Joseph Paxton.

On the 17th he visited The Royal Park and Forest of Windsor before reaching London on the 18th. There, he approached the Office of Works of Her Majesty’s Palaces and Parks and found a “generous kindness,” and warm welcome, which almost immediately transferred to each superintendent of public parks in the vicinity of London, Olmsted reported.

“During the following fortnight, I was engaged every day upon the parks of London, some of which required several visits. I then proceeded to Paris, being detained one day on my way thither by a violent gale which prevented the boats from crossing the channel.”

Olmsted also met with former Central Park advisory commissioner James Phalen, now living in Paris, who introduced him to valuable contacts. French engineer John Charles-Adolphe Alphand showed the visitor newer French parks of the Bois de Boulogne, near Paris. Olmsted made eight subsequent visits there which “were of value to me,” he reported. His two weeks in Paris also included a visit to the formal gardens of Le Notre at Versailles, after which he headed north to London for his final week.

While there he visited the Royal Botanic Gardens at Kew, “the superintendent of which, Sir William Hooker, I found extremely interested in the Central Park, expecting my visit, and ready to furnish me with most valuable advice”. The Regents Park gardens filled out the week, along with helping New York nurseryman Samuel Parsons choose specimens for Parsons’ private and public clients (including Central Park). Pursuing a new interest, Olmsted also collected books for his park library.

On the second of December, he was off to Ireland to visit Dublin’s popular Phoenix Park and Zoological Gardens before boarding his ship back home to America.

After a decade of discovery and designing, the apprentice farmer had transformed into a professional landscape observer. Settled in his new home life at the Mount St. Vincent Convent with family and support nearby, his path seemed clearer now. The park gained support and visitors through the year 1859 as it opened—even during construction—to the Greensward designer’s best ideas.

Next month:  Olmsted’s Civil War service in Washington, D.C., while on temporary leave from Central Park. 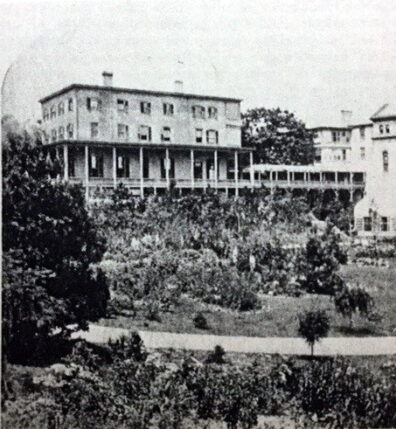 The abandoned Mount St. Vincent Convent buildings, within the boundary of the new Central Park, became the home—and office—of the expanded Olmsted family after the June 1859 marriage of Frederick Law Olmsted to his brother’s widow. The three children (including the oldest, John Charles) found many glassed-in warm rooms below the living quarters to play in and enjoy the park scenery just outside their front door. 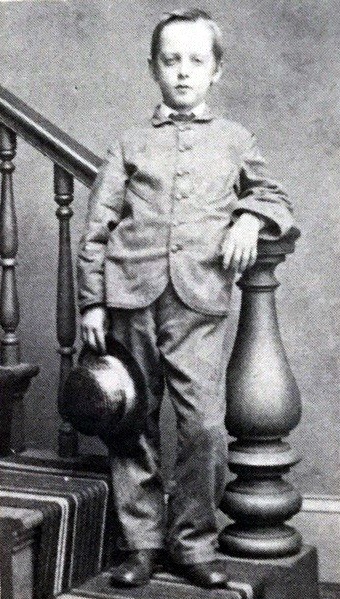 John Charles Olmsted at his new home in Central Park, aged almost 8 years old. He would eventually design many Pacific Northwest parks, home and school sites for clients at the turn of the next century after apprenticing with his father FLO in the early years of the landscape architecture profession. 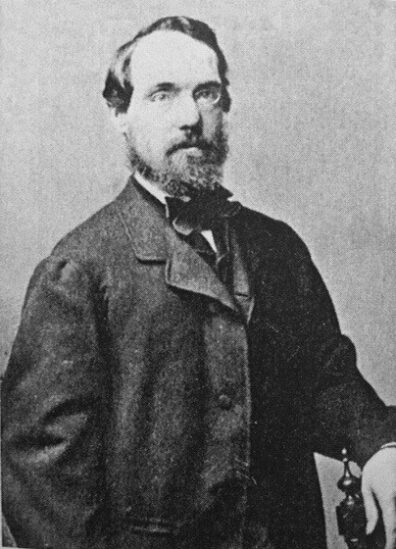 Architect Calvert Vaux, who invited park superintendent Frederick Law Olmsted to enter, together, the contest for the Central Park design. Their Greensward design plan won over 32 other entries in spring 1858. The two men would collaborate on many other design projects in the years ahead. 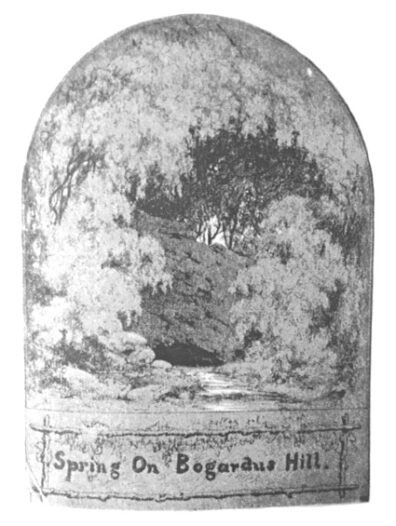 Courtesy of the Museum of the City of New York.

The Greensward Plan for Central Park. Lithograph from (Frederick Law Olmsted and Calvert Vaux), Description of a plan for the Improvement of Central Park, Greensward, New York, 1858.