Residents of Seattle and Central Puget Sound are familiar with Sound Transit as the agency behind their multi-billion dollar light rail train network. Without commuter trains, the growing region of more than three million would suffocate under congestion. Yet in its beginning phase, the public transportation organization confronted one controversy after another and teetered on the verge of collapse. Back on Track: Sound Transit’s Fight to Save Light Rail, recently published by Washington State University (WSU) Press, is an inside look at those early days and how WSU graduate and new CEO Joni Earl, despite having no transit experience, pulled them from the brink of closure.

The book’s primary focus is on the pivotal year 2001. Sound Transit faced angry backlash from multiple fronts after announcing it would require a billion extra dollars and three additional years to complete its initial light rail line. There were unrelenting attacks from all corners—legal, political, and personal. Opponents intensified their efforts to eliminate the fledgling agency, and headlines in local papers repeatedly mocked the organization as “hapless,” “beleaguered,” or “out of control.” At public meetings, irate taxpayers, joined by a number of regional politicians, lined up to eviscerate the agency’s leaders. Booth Gardner, a former two-term governor, did not support light rail. He shared his opinion with anyone who would listen, and many did. Dino Rossi, then a prominent state Senator, introduced a bill in the legislature asking voters to dissolve Sound Transit. In Washington, D.C., approval for desperately needed federal funding faltered as members of Congress from as far away as Kentucky railed against the Seattle agency.

Back on Track author Bob Wodnik is a former Puget Sound reporter and columnist who received the Blethen Award for feature writing and an Excellence in Journalism award from the Pacific Northwest Society of Professional Journalists. He witnessed events as Sound Transit’s senior communications specialist from 1999 to 2017. To recount their story and detail challenges and solutions, he utilizes in-depth interviews with the start-up era’s major players. In particular, he profiles Joni Earl, who became the driving force behind saving Link light rail and its $3 billion program—one that today averages more than 76,000 riders every weekday. 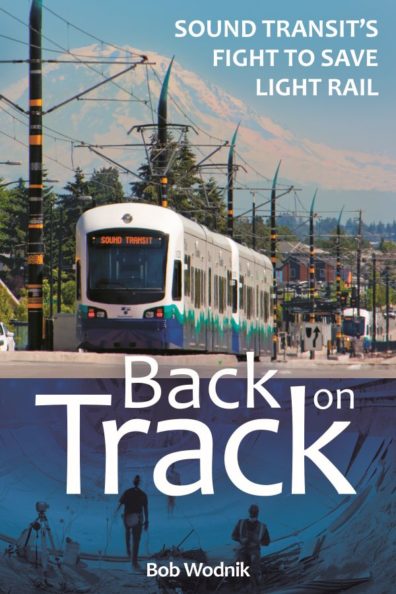