A thoughtful reader recently alerted WSU Press to missing pages in her copy of Sagebrush Homesteads. We narrowed the cause to a scanning failure that created a deficient printing file. Unfortunately, although older copies are intact, this means that all the copies from our most recent print run—about 500—have the issue. Please accept our deepest apologies for the error.

If you have purchased a flawed copy, please contact us for a free replacement. We will provide a new print copy, and/or a complete PDF. For your convenience, the six missing pages are available to read and view below, and as a free download (select the missing pages option under FORMAT) on the Sagebrush Homesteads product page.

fright. A ten foot, eight by eight inch timber had been set upright deep into the ground for a snubbing post. Even then, they couldn’t get near enough to put on the harness until a blinder was tied over his eyes. They handled him as gently as possible, patting and rubbing his back as they put on the harness and buckled it, talking to him as he trembled under their hands.

Matt, an old white horse who had long since adopted an easy-going gait that nothing could excite, was used as a team­mate in breaking in young horses. Roanie was hitched with Matt and driven around in the plowed field for a while to accustom him to the bridle and the pull on the reins. Next, the team was fastened to a heavy drag to teach him to pull a load and to become used to an object at his heels. During his training period he was kept in the barn where he came in closer contact with men, though little progress was made in his training. He was so unmanageable the men were convinced he was an outlaw, and he was turned out to pasture with the other horses.

Some weeks later when Roanie came to the barnlot for water with the other horses, Papa noticed he was limping badly. With the other horses he was driven into the barn. Closer examination showed one hind leg was badly swollen, and a piece of barbed wire extended out from his foot. He had become entangled in a barbed wire gate which had been left on the ground and a loop was drawn so tightly around his foot just below the fetlock it was with difficulty cut away. His foot and leg were supperating, with the swelling extending far up his leg. It must have been extremely painful. In his sickened condition, he stood trembling but no longer fighting. Treatment was begun. His leg was placed in a five gallon can of warm water, to which was added carbolic acid, several times a day. This treatment was continued for periods each day until the infection was stopped and the leg returned to normal.

Roanie learned that man is a friend instead of an enemy; and when it came time to resume his education to work he no longer fought. He became the most willing horse on any team; his neck arched proudly, prancing along with tail slightly raised, he was always out in front, a natural leader.

At first he was placed in the wheel team when a four-horse team was being driven, as a safer place for a young high-spirited horse, but he was always in trouble there, impatiently biting his team-mate or the ones in front. Then someone got the idea of trying him in the lead team. From that time there was no more trouble with Roanie; after a long hard trip he would (Orne in prancing, flecked with foam and covered with sweat, but out in front of the rest of the team. He became the favorite farm horse, whether for riding, driving or working; to be trusted anywhere. The buckskin never gave in. Kicking, striking, lying down to be dragged when placed in the header team, he would not accept the control of man.

A man by the name of George who was working for us during the harvest season, decided to try riding the buckskin when all other methods to break the horse had failed. Buckskin was taken from the header team and drawn up to the snubbing post, blind­folded and saddled. George climbed on, settled himself into the saddle with his spurred boots in the stirrups and told Jim, “Turn him loose!”

The buckskin seemed to go insane with rage; squealing his hate as he went into action. The next moment he reared on his hind legs to throw himself over backwards in an attempt to crush the hated object on his back. George saw what was happening and managed to leap off to one side. Quicker than a cat, the horse regained his feet and before George could get out of the way, Buckskin bit him on the thigh then whirled and lashed out at him with both hind feet. One hoof struck the same thigh that had received the bite.

Now George’s blood was up. ‘I’ll ride him or kill him,” he exploded. But Jim stepped in. “No, George,” he told him, “That horse is liable to kill you. He is too dangerous.” Papa and Billie agreed with Jim, so all efforts to tame the buckskin were discon­tinued and he was traded off for a gentle riding pony.

department,” Stella explained. “The instructors are always glad to have us bring specimens for biological study.”

Such a reasonable request was not to be denied. Doubtless a number of scorpions were just waiting the opportunity of going to college! Armed with short sticks and carrying cans and jars, we spent most of one afternoon in the big flat, turning over rocks in search of the little poisonous creature with the long jointed tail. That tail ended in a bulb and sharp stinger which we were careful to avoid when an over-turned rock disclosed one beneath. It was carefully prodded with the short stick to get it into the jar as it tried to find something into which to plunge that stinger. About twenty scorpions were captured that day. To render them safe for travel and handling, she secured formaldehyde at Carl’s drug store.

Mamma’s sister Ellen Wood, came out from Saint Louis for a visit and to be near her boys, Cleve and Ottie who were both employed in Seattle. Aunt Ellen stopped for a few weeks’ visit before going on to Seattle, and while at our place she became interested in homestead land.

One mile north of our place in the same section with the Barton homestead, was a quarter section which had not yet been homesteaded. It could be reached on foot across a deep coulee that lay between our place and the quarter section. About forty acres of tillable land lay on top of the bench above the flat, and another possible forty acres in the flat.

“There is some pretty good land in that part on top of the bench, Ellen,” Papa told her. “Now that the railroad is coming through, there will be more people looking for land.”

“You can prove up any time after three years. Susie would be glad to have you near us, and you could visit back and forth so you wouldn’t be alone all the time.” Papa knew how pleased Mamma would be to have her sister living near.

“Some of the children could come over and stay part of the time at nights,” Mamma assured her. “We would see that you had a way to get to town for groceries when you need anything.” Aunt Ellen was interested, and when she heard that someone else was also considering the property, she lost no time in getting to the land office and securing it for herself. When the railroad grading construction camp nearest to her place moved on, she bought the office shack and had it moved to her homestead.

It was a lonely place in the little tar-papered shack, with Bartons as her nearest neighbors three quarters of a mile away. Some one of our family often went over to keep her company, or she came over to spend a few days with us. After the boys’ work at Seattle was completed the next spring, Cleve came to live with her; but since there were no calls for a marble setter amid the sagebrush, he was often away working.

“If I just had a little dog for company, Cleveland, it would not be quite so lonely,” she told him one day. She knew there

“Did you girls bother any of their melons?” Mamma queried them.

“Well, the coyotes were he!ping themselves and we thought we might as well have one as for the coyotes to get them. It was good and ripe, too.” They didn’t seem to feel badly when Mamma chided them for it.

The next time the cows were not to be found near home, it was evident they had gone back to the neighbors. Remembering the melon patch, I generously offered to ride after the strays. As I hoped, my offer was accepted.

Yea, the cows were there. So was the watermelon patch, as I discovered after some searching. Riding up to the house to say “Hello!” and incidentally, to assure myself there was no one at home, I returned to the patch. Coyotes had been raiding it, too, I could see as I got off to examine if any were ripe, and started to pick one. I could feel eyes watching me on all sides. Guiltily, I got on my horse and started after the cows. But Temp­tation was not to leave me alone so easily. Again, I looked at the patch of melons thinking of the ones the coyotes were getting. Turning my horse, I rode back to the patch, jumped off and hastily picked one before those All-seeing Eyes could make themselves felt too strongly. At a distance from the patch, with anticipation of its juiciness, I broke it over the saddle horn. It was green. I rode on after the cows.

“WE’LL BUTCHER THE HOGS tomorrow. Billie and John can be over to help.” We were at the supper table, and Papa was letting Mamma know his plans for the next day.

“How many are you butchering this time?” inquired Mamma. “There will be three to kill this time. Those young shoats are

fattened and ready to kill, and the weather is turning cooler.”

Vapor was rising from the long vat in the barnyard on that crisp October morning. Papa was astir early to get the water heating so it would be ready when Billie and John got there to help.

A long shallow pit had been dug in the barnlot in which a fire was laid. The long metal scalding vat filled with water was placed over this heat, and from time to time Papa tested the water to find when it was ready for scalding the hogs. A heavy timber was set up on crossed supports near by on which to hang the hogs. Boards were laid on saw-horses beside the vat to form a platform on which the scalded animal was placed to scrape off the bristles.

Otis and I were always interested in anything unusual going on about the place, but when the water was finally ready for the next step, Papa would say, “You children go to the house to your mother.” We were never allowed to watch what went on at the pig pen. A harnessed horse stood near in readiness to pull the carcass to the small platform beside the scalding vat. From the kitchen window we watched until the dead animal was safely in the water.

“Mamma, can we go and watch now?” We knew Papa would not mind if we watched the rest of the work.

“Yes, if you keep back out of the way; and take this big 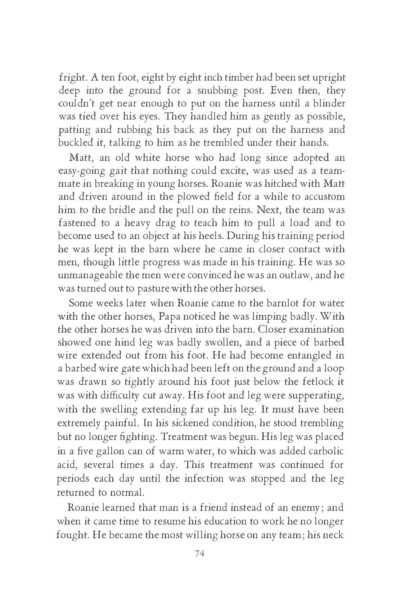 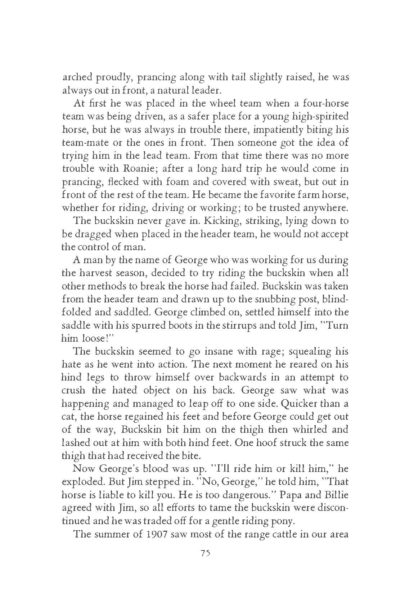 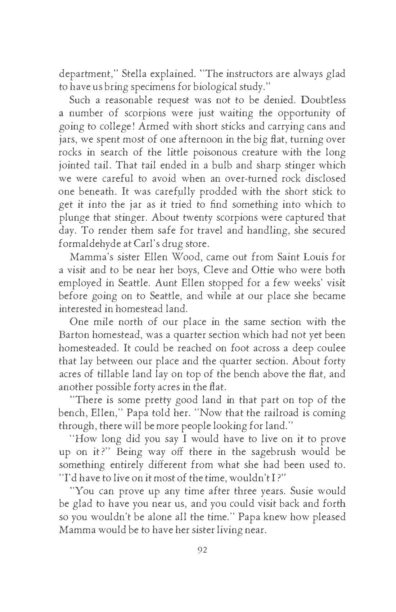 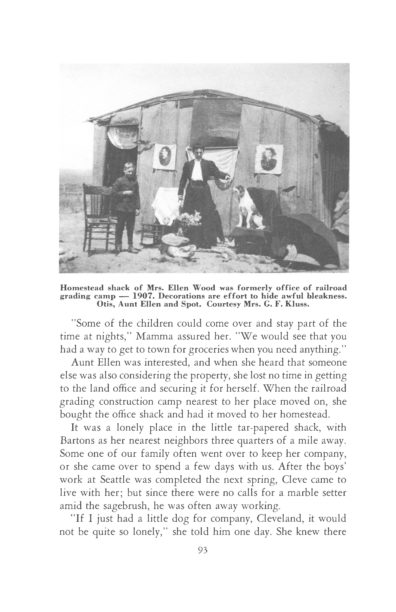 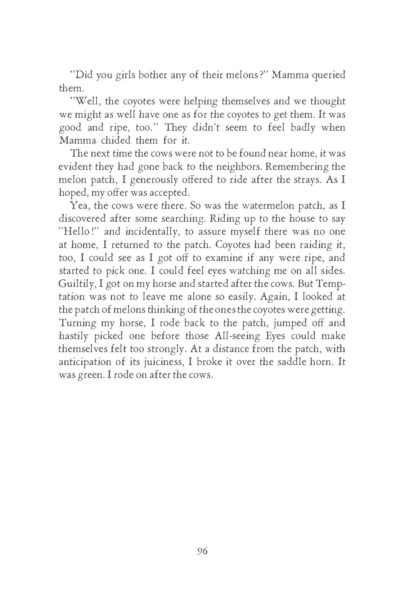 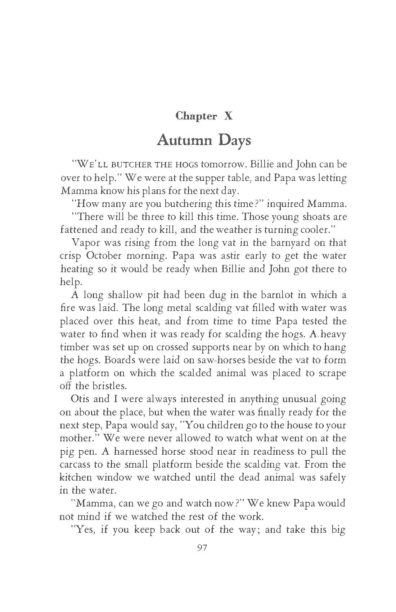